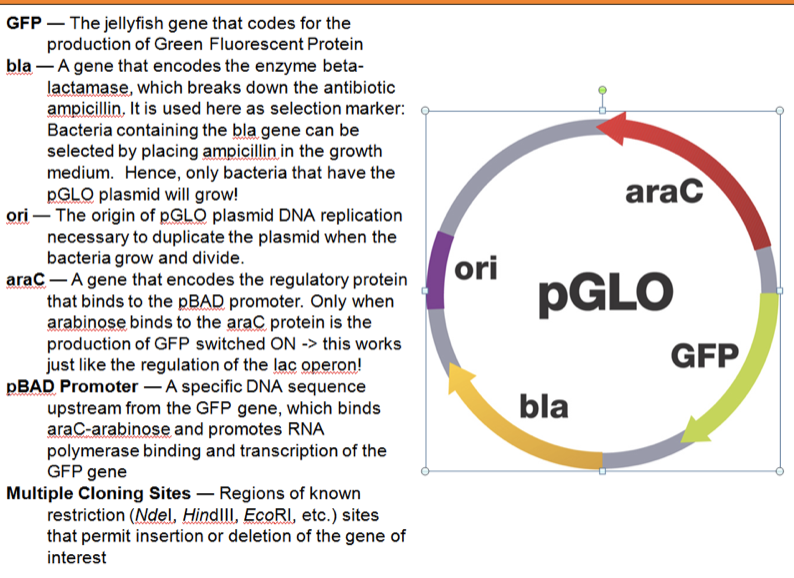 The purpose of this laboratory experiment was to extract a protein, called the Green Florescent Protein, from a jellyfish’s genome, and see that if that protein could be transferred and affective on an organism that does not glow. To get started on this experiment, we had to obtain the materials. We started by having a previously grown bacteria colony from the night before. We also need to have both CaCl2 and a LB nutrient broth as transformation solutions. It was also necessary to have four separate Petri dishes, each labeled differently with LB/amp, LB/ama/ara, LB amp and LB. The most important part of the experiment was to have the plasmid DNA that contained the gene for the glowing protein. Other tools that we needed were a centrifuge, ice, refrigerator, and incubator because it was necessary to control the temperature of the experiment at all time to ensure proper growth of the bacteria. The picture below gives a brief description of what pGLO is and the purpose of all parts.

1. We went about this experiment by using a single colony of bacteria.

2. The bacteria was added into two separate tubes, both containing a transformation fluid, CaCl2, that had been chilled in ice for some time

3. Next, plasmid DNA, containing the GFP, was added into only one of the tubes, labeling it +pGLO.

4. Then, we needed to Heat Shock the tubes. They were incubated in ice for ten minutes, put in a heat bath for for 50 seconds and then placed back into the ice for another two minutes.

5. After the temperature changes, we added an LB nutrient broth.

6. Once the +pGLO and –pGLO we at room temperature, we added the solutions to the four different labeled Petri dishes. The tubes were divided as so:

7. Once the separation was complete, the Petri dishes were left overnight to incubate in 37 degrees Celsius

Results: After the overnight incubation, we examined the growth of all four Petri dishes. First, LB/amp, had some bacteria growth on it. Second, the LB/amp/ara not only grew but also glows because of the GFP. The last two dishes, LB and LB/amp, didn’t grow at all. The results came out as expected because the plasmid DNA was only added to the +pGLO tube. We already knew that LB and LB/amp would not glow let alone have any growth.