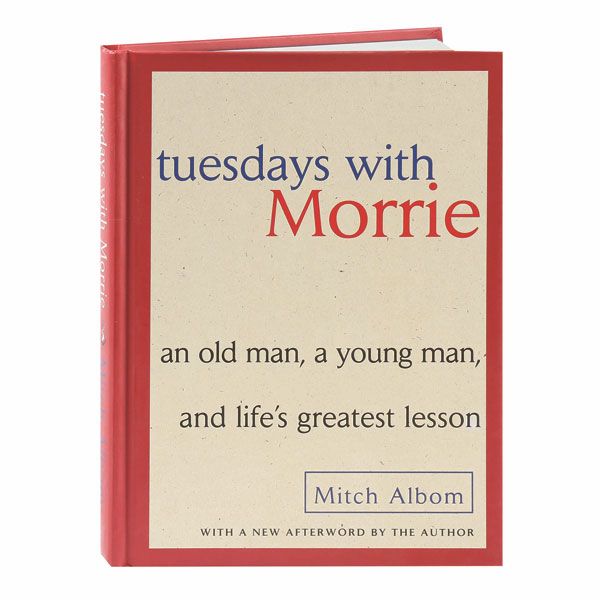 Reading Tuesdays with Morrie for the second time was an extraordinary experience. The book itself hadn’t changed, but I can’t say the same for my understanding of its meaning. I read the book when I was young, but as you know, with youth follows ignorance. As I’ve grown to better understand my life and surroundings, this book has become a reiteration of so much I have discovered during my existence; confirming what I’ve learned and expanding on those ideas.

Morrie stressing to Mitch the importance of creating his own culture: one of acceptance, communication, love, values, openness, and happiness is such a valuable lesson. I too believe popular culture is an influence to ignore what matters to you because of its foundation for greed, selfishness, and superficiality. Perhaps true suffering may come from complete societal acceptance, as you have now done everything in your power to artificially please the wants and needs of those who don’t matter. Mitch must realize this as he had been chasing an artificial dream when he’s knocked down chasing Andre Agassi; a symbol that what he is chasing is wrong.

I’ve avoided watching television over the past few years, as I’ve come to realize the media’s manifestation of fear they’ve instilled in so many Americans. I limit the amount of news and what type I’m exposed to, as well as any reality/drama shows. They’ve become this absurd standard of living for so many people; as if it is how normal people are supposed to live. Although I’m aware of the media’s impact on society, it’s affect on my life will be felt if I’m surrounded by it too often. I know it influences thinking and I don’t want to it to pollute my positive, loving spirit.

The Nightline interview with Morrie had a much more powerful impact on my current situation. I was reminded of so many valuable lessons I have learned throughout my life that I walked out of our room a more humble person; with a smile as big as Morrie’s during his last moments in the final interview. During the rest of this reflection, I’m going to address and react to the most important points I felt from Morrie and our discussion on death.

For whatever reason, sometimes the best solution to a problem is to not have that problem in the first place. I’ve never had anyone very close to me commit suicide, but recently one of my close friends has experienced this travesty. I agree with the idea that suicide is the easy way out. It’s possibly the most selfish act a human being can commit. So many around you are affected while you lay in what is assumed to be peace. I have trouble imagining that the same mind that took its own life is one of peace. The loving people around you should not have to suffer because your life was hard at one point in time. A person should learn to know when times hard and deal with the situation that’s driving them towards the edge. Suicide has entered my mind, sometimes for good reason and sometimes for no reason. Regardless, I know it is not an option, as I care to much about the people around me and the one life I get to live. No matter how hard I think my life may be, I know there are others in the world struggling more than I’ll ever know.

I noticed Morrie’s situation is one of anticipated death rather than sudden, as we experienced in The Perfect Storm. Morrie is given the opportunity to share what he is going through, while the men in Perfect Storm were still experiencing death when it happened. Does that mean either should/could/would have lived their lives any different? Morrie couldn’t be more right in addressing the cultural fear of death instilled in our society. He’d even made it a point to say that he “enjoyed being a baby again.” I’ve made it a point to live my life without fear of death, because I have no idea what could happen tomorrow. If I don’t take advantage of the opportunity that is my life, I don’t think I will live the fullest life possible. I’ve been to the edge of death; almost drowning while trying to water ski, yet my biggest concern after the incident was the pain in my groin from being dragged underwater at 40mph. I may die suddenly, or after I’ve lived a full life, but however I go, I am not afraid, because I am completely content with how I’ve lived, and I will be until it is my time to pass. We shouldn’t only enjoy the last moments we have on this planet, we should enjoy them all. As you said, “if it ain’t fun, it ain’t worth it.”

It was great to hear Morrie get into how to die, but in the end make it a point that he has realized he is “not just a wave, but part of the ocean” and “simple in ways like everybody else.” I had a discussion about this with a few friends while in Sydney, Australia, overlooking a scary Pacific ocean during one late night. We came to somewhat of a conclusion: The world is going to end at some point in time, whether humanity, nature, the expansion of the Sun, et al destroys it. So, it is our duty as a species to leave this planet and/or avoid our extermination. However, can we accomplish this without coming together as a race? If the ultimate goal of humanity is to survive, can we survive individually? However, in the end, some believe all we have is ourselves. So, why not live for yourself during the small period of time you have on Earth? Selfishness and greed could be the cause of our extinction. We are part of a whole, and as a whole we have to survive. As Morrie put it, what better way to create a better world by becoming more compassionate, loving, responsible, and aware of ourselves and others? I can’t think of one.

As I’ve aged, I’ve come to realize that death has surrounded more than it has directly affected me. No person in my immediate family has passed, yet so many of my friends and other family members have felt the direct effects of someone close to them dying. I even held a job aiding and training the elderly with rehabilitation equipment over a summer. I was continually exposed to all types of people living out the end of their lives, all dealing with their final time on this planet in so many different ways. Some were glowing, waiting for me at their door and inviting me into their homes with a cup of juice waiting on the counter. And others were miserable, sucking down cigarettes while sitting immobile on their couches watching the terrifying media 24 hours a day.

Regardless, I had so many wonderful conversations and learning experiences with these people: Their simple desire for a heart to heart with someone who will listen and at least act like they’re not in a hurry to move on with their own life allowed me to grow. No matter how bad I may have been feeling on a day, it was incredible to know my happiness and love could bring a smile to so many. I learned so much from these people who have seen and experienced the world more than I have, and noticed some of the points Morrie addressed when speaking on when and where he will die. I think something we all fear is to be completely alone; whether imprisoned in a body or locked up in a group home or even jail cell. Human interaction and loving relationships keep us alive.

So, I understand what Morrie means when he says that he will decide that his time has come when he won’t be able to do the things that make him who he is or act with emotion. My grandfather is currently in this situation. He hates nothing more than a hospital. He wants to leave this earth in a place of comfort and with dignity when the inability to respond settles. “Go out the right way,” whatever that may mean to him.

It was wild for Morrie to address the outside imagined world when he was confined inside to his bed. When working at my job, I would continually see people trapped inside, looking out, caged like an animal. I always told myself if I were to end up in a place like that, I would end it myself. I felt like these people standing at the locked door waiting to sneak out into the sunshine had their freedom stolen from them. I never want to wish I could be somewhere, I want to be there. When I lose the ability to do what I desire within my capabilities; that may be my end.

So, am I afraid of death? No. Have I been directly affected by it? No. But, I believe I’ve experienced a close enough edge and lived in a way that allows me to love, care, and experience everything life has to offer without being afraid of what could happen. I tend to think of it this way: If I were to die tomorrow, would I be happy? Yes, I’m absolutely content with every high and low emotion I’ve encountered throughout my existence. I don’t think a life lived afraid and unhappy is a life worth living.