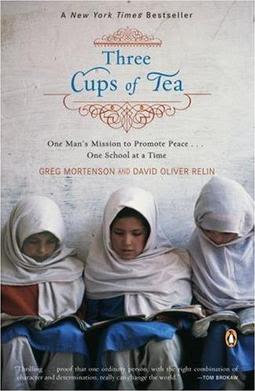 I was fortunate to hear Greg Mortenson speak on how he wants to change the way people look at the world. He views himself as a “role changer.” He is the author of the book Three Cups of Tea. He grew up in Africa, but moved back to the United States when he was 15 years old. One of his goals is to replace people’s ignorance with peace and learning. He has shown that people can be empowered and make a difference no matter where they originated.

Greg indicated that in contrast to America, approximately 90% of Pakistan’s students have conversed with their elders about the past. This indicates that Americans have lost some sense of tradition. It is important to know about your past and from where you came. Americans take this for granted when referencing today’s luxuries. Some people grow up with the assumption that this is how their elders grew up, when in reality they did not have it easy as my generation does when they were childs.

I thought it was extremely interesting that Greg did not know anything about racism or prejudice until he returned to America after 15 years in Africa. When he returned, he called himself African, and was beat up because of that statement. It has become the norm for American’s to stereotype and segregate virtually everything possible (gender, race, beliefs, etc.) It has become a common thing in the United States that if you are from another country and you express what you believe, you may suffer consequences. Maybe racism doesn’t exist in societies where family and peace is of priority and importance.

I found it interesting that he said the United States’ greatness is its diversity. There are so many people that come from so many different backgrounds. It is interesting to think about the amount of factors that have shaped who a person becomes (peers, school, media, etc.). No two people are the same, yet society seems to get along quite well.

Greg seems to be an amazing person. He is ambitious, dedicated, and passionate about what he believes. I truly believe that he has and will continue to help change the world, something I greatly admire. He could be perceived as a motivational speaker; inspiring people to take part in the betterment of society. I agreed with much of his ideas; such as “you have to live in poverty to understand it.” He has inspired me to want to leave the world a better place than how I see it now.