No Country For Old Men Reflection 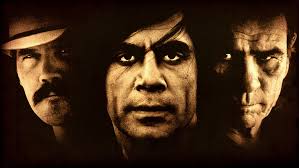 I chose to look at the politics of No Country for Old Men. This could be similar to the study question on Do the Right Thing and the racism involved. However, instead of racism, politics are the topic of analysis.

This film seemed reluctant to change, as it looked in the past rather than the future. It focused on a sort of grieving remorse. This film questions conservatism while sympathizing the opposite viewpoint.

This movie pits old versus new, meanwhile finding the old typical hero and the new terror. In the beginning Tommy Lee Jones is talking in a voice over, citing how back in his father’s day sheriffs never carried guns because it wasn’t necessary. Jones seemingly agonizes in every scene of the transformation of old to new, offering a point that when kids stopped being polite to their parents that the world basically went down the tubes. He wonders how we are supposed to fight these new horrors of the new world.

Jones constantly looking into the future won’t stop time from continuing. The future chaos is represented by Hispanics who appear as criminals in the film even though the film takes place near the border of Mexico. This caused me to think about immigration and the "problems" it is causing today. It seemed to me as if Jones’ is offering a “white” view of the past. Maybe this is because conservatives that talk about the “better and simplified” times in the U.S. refer to the early-mid 1900’s that was made of dominating whites. However, this “better” time in America was formed from racism and bias.

The film makes a point that the good days that Jones repeatedly refers to never actually existed. However, this fact doesn’t prevent Jones from still craving those days. This idea or fantasy is even more conservative than the actual history that occurred. Characters in the film crave the past.

It was on of the the most suspenseful films I have ever seen. The actors are perfect for their characters, and the filmmakers show why they are so brilliant. However, I simply disagree with many viewpoints of the film.