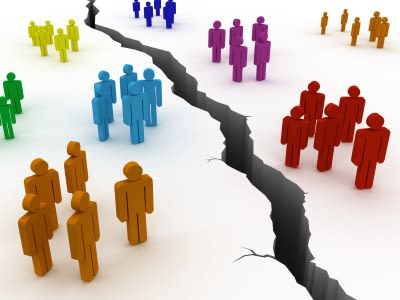 Conflict may exist between groups within a team or under a leader. When conflict arises, conflict-handling behaviors occur when attempting to negotiate an outcome. If the person in formal or personal power (Robbins, 177-178) does not handle the conflict correctly, it could result in decreased group performance. When perceived, felt, functional, or dysfunctional conflict (196,199) emerges, negotiation with applied bargaining strategies, such as distributive and integrative bargaining, must be used to resolve the conflict. Conflict surfaces for many reasons; a group’s diverse composition, beliefs, theories such as the status characteristics theory, group dynamics, bias such as the halo effect, hindsight bias, or simply because there is an ineffective person in power. Conflict is generally looked at as negative. However, there are situations when positive conflict is needed in order to prevent negative effects of groupthink (113). Conflict, whether positive or negative, connects negotiation, teams, behavior, and power.

Conflicts within Groups or Teams

Any tolerable amount of conflict within a group is necessary in order to encourage creative ideas and avoid groupthink. Groupthink has caused devastation in the past, such as the Bay of Pigs and Pearl Harbor (114). The leader must recognize that the group is falling victim to conformity. There must be a feeling of psychological safety in order to a set a norm for the group. The leader must make his or her personal preferences clear as well as limit group size in order to minimize groupthink. Also, positive conflict generates a sense of membership for all team members, which will lead to creative ideas and participation. When team members feel more involved, they are likely to be enthusiastic about being a group member and offer opinions on matters of importance.

Negative conflict may arise within a team because of many reasons. In referring to the status characteristics theory (107-108), it would create sub-groups with differing opinions which would create a group with uncommon goals. When these factions divide the team, it may cause the team to fail.  Also, team members may disagree with the team leader and refuse to follow the direction of the person in power. Therefore, when negative conflict does arise, it must be dealt with immediately. However, it is best if it is avoided in the first place. Negative conflict also has a destructive effect on the team’s productivity and overall moral. In order to prevent such conflict, group leaders must prevent inner-team factions, establish trust and open communication, and effectively listen to each individual member’s ideas or problems without a negative attitude.

It is important for the leader to understand common stereotypes and bias such as the halo effect (30). A leader must prevent a person’s traits from causing them to be bias towards certain subjects, or it will negatively affect the group. Also, hindsight bias (92) is something that leaders should consider to be present. Members of the group may tend to think they are better than others, saying when something goes wrong that they “knew it all along.” Managers should manage conflict in a way that it leads to the team’s goals being completed.

Interpersonal conflict must be dealt with and resolved promptly before it evolves into a verbal war between team members or a team member and his or her leader. However, dealing with this situation is usually uncomfortable and difficult. The first step to solving conflict is confrontation. The problem must be talked about before it can be solved. To solve the conflict, members of either side of the conflict must negotiate. If the conflict is not solved, the group may fail like the Lehman Brothers firm.

If the relationship is long term, an integrative bargaining approach should be taken. If it is short term, the use of distributive bargaining should be applied (202-203). These are both negotiation techniques which possess different characteristics. A manager must be able to negotiate with team members when there is a conflict in order to achieve the group’s goals. The team leader can set forth rules that aid group members in resolving conflicts between themselves, or harbor a safe environment that promotes kindness. Managers can use tools such as collaboration, avoidance, competition, accommodation, and compromise to solve problems within the team (208). The team leader must account for his or her team members. This will lead to a successful team that achieves their goals.

Conflict connects teams, behavior, negotiation, and power. Conflict is a vital part of any group that exists. If the leader uses his or her power to effectively approach conflict, the result can be extremely beneficial. Correct management that uses negotiation skills to help fix any negative conflict within the team is critical for that team to be successful. These concepts aid teams in maximizing their ability and effectiveness in reaching their goals.