Do the Right Thing Reflection 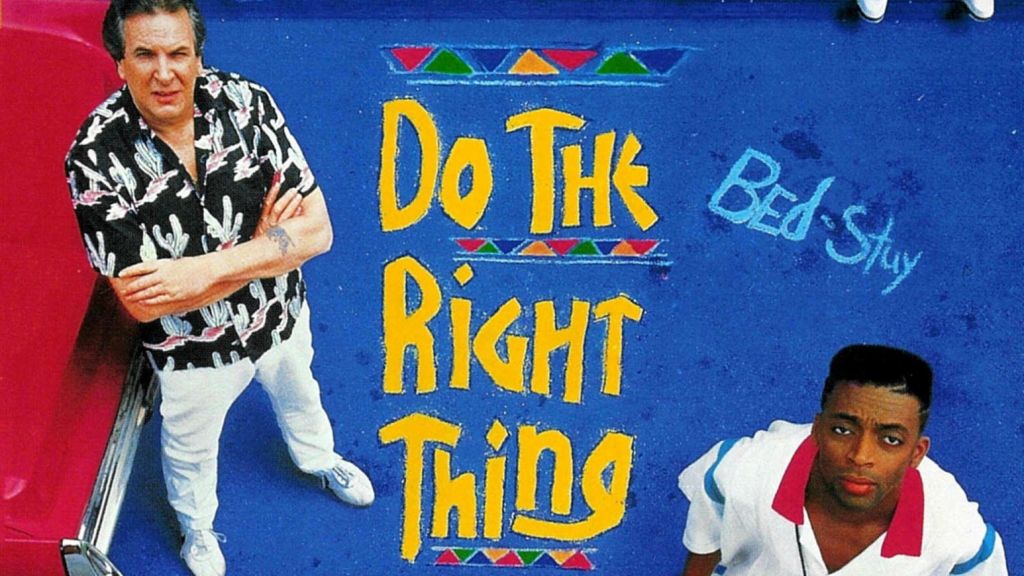 Do the Right Thing presents ideas and brings about issues that were not really talked about in the 1980’s. The film was extremely creative. The music is presented in different styles; from jazz to rap, and even reggae. I felt sort of caught up in the music, and when Sal smashes Radio’s boom box with the baseball bat, it seemed like something great had been destroyed. Possibly a “person” or an idea was killed. Spike Lee expresses some ideas with the song “Fight Power.” Why do people focus on the negative rather than the positive? Why not fight for power rather than fight power?

When Smiley tacks on pictures of Martin Luther King, Jr. and Malcom X it allows the viewer to think about history in real life and relate it to the film. As characters speak in the movie you can understand their meaning as it pertains to the struggles of racism.

I didn’t think everyone in the film was racist. Sal liked Mookie who may or may not be racist. Sal also liked Mookie’s sister who was, in my mind, absolutely not racist. I wouldn’t consider Mookie racist. He is proud to be black and criticizes people who are intolerant of his ethnicity, such as Sal’s son. I believe he is smart for doing this rather than racist.

I think it is good that certain ethnic groups are impatient. I realize that different racial groups that view the movie will perceive it’s meanings differently, but I believe that all ethnic groups must at least attempt to understand and respect each other in an attempt to work together as a way of accomplishing common goals. If this does not happen and businesses of strangers are constantly subject to arson in neighborhoods, than we as a community are going to continue to grow further and further apart.

Mookie is a very weird character. Sal can get him to work, as I got the impression that the other characters would not be as reliable or simply want the job. However, Mookie goes about his job with some spite. He isn’t in a rush to deliver food and always gets caught up in some sort of event or conversation while in the process of completing his work. It’s unclear what “side” Mookie is really on, as he seemingly starts the riot. Or maybe Sal or Radio Raheem does. I believe Mookie threw the ashcan out the window because of the brutality brought upon Radio by the police, not because Sal smashed the boom box. It is feasible that some whites may view this film and leave with a newfound fear or hate for the black community because of the actions taken towards Sal’s shop.

Mookie chooses sides when the can is thrown out the window. When this happens he says, “This is what needs to be done to this damn place.” I believe this conveys a message that doing the right thing was choosing sides and knowing your enemies, regardless of your enemy’s kindness.

The black community may not see Sal as a “good” person. They could be blinded by his son’s existence, as he is an awful person with a bad heart. As a result, black viewers may take satisfaction in the fact that Sal’s son has been kicked out of the neighborhood and the pizzeria destroyed by the end of the movie. But honestly, I have no idea what it's like to be a person of color in todays world. I can only try to empathize.

The conclusion of the film conveyed the image that the only way to solve anything is to close up places such as Sal’s because they simply don’t belong there. If Spike Lee is saying that white businesses don’t belong in black communities, than he is saying life will go on as it always has. I believe in our society there must be trust and respect from all races. This is how I interpreted the end of the movie. This is harder for people of strong beliefs and ethnic pride to grasp. Sal didn’t put a black picture on his wall because, as he said, it was his wall. However, he made his money from the black community. As I saw it, the film advocates multiculturalism. Sal is the “king of the castle” who decides who the all-time greatest hits are to be displayed on the wall, and his castle is stormed.