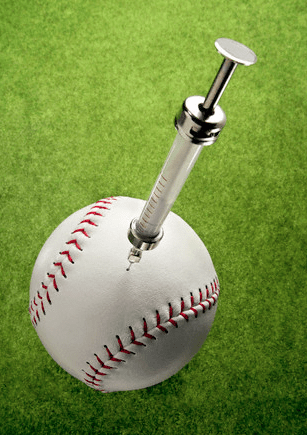 The viewpoints for and against the use of illegal substances in baseball are examined and a conclusion is drawn as to offer a correct course of action.

Performance enhancing drugs have been a problem in Major League Baseball over the past decade. However, Major League Baseball has been in existence for over a century. Drugs such as steroids have become more common among MLB’s employees (players). There are two points of view that need to be considered when referencing this issue:

The purpose of this report is to analyze the positive and negative ramifications of enhancement drug policies in MLB and recommend a course of action. The intended audience for this report is high school students and beyond.

Research for this report was conducted via internet and RWU library, utilizing various sources of information. There is an overwhelming amount of data which cites attendance, “power” numbers, player salaries, and revenue of MLB.

The following analysis will investigate the effects of enhancement drugs in the world of baseball, both good and bad. A logical course of action will be recommended following the analysis of this controversy.

When a baseball fan enters a ballpark, they expect to see a competitive and fair game played by talented athletes. Performance enhancing drugs prevents this from happening. Fans should be able to cheer for their favorite player knowing he didn’t cheat or enhance his ability unnaturally in order to succeed.

Steroid testing should be incorporated in not just baseball, but all sports. In this day and age, people will do anything to get ahead. President Bush urges that everyone help play a role in preventing players from using enhancement drugs. The commissioner of MLB, Bud Selig, agrees that the use of enhancement drugs in baseball needs to end. He hopes to eventually reach a “zero-tolerance” rule. Last year, random drug screenings were administered to various players around the league. From those players, between 5% and 7% tested positive (Antonen, “Selig”).

In a poll done by USA Today, 79% of Major League Baseball players said that they want drug testing to be enforced.  Surprisingly, only 17% of players stood behind their union by saying they didn’t want drug testing done.  Until mandatory drug testing is put into play in MLB, fans will continue to speculate over which players are and which aren’t using steroids (Antonen, “USA Today Poll”).

The health of the players also needs to be taken into consideration. Steroids increases the likelihood that a player will be injured, placing them on the disabled list and forcing them to miss work (games). A USA Today study showed that injuries among major league players increased by 32% from 1992 to 2001 (Yeager). Additional risks of steroids abuse include heart disease, stoke, live tumors, and depression (Reilly).

Steroid users in the minor league system go unpunished when caught (Yeager). This allows players to continue use, boosting their chances of getting to the Major League level and receiving a big paycheck. This is also implies that MLB does not care for its players. By not punishing them early on MLB allows players to damage their bodies in order to produce better results.

A major contributor to the distribution and production of steroids is the company BALCO. Since steroids have become a major issue in sports entertainment, investigations have begun to take place. Victor Conte, the founder of BALCO, along with three other employees, has been indicted on the charge of distribution of an illegal substance (Layden, 2004). Athletes who have allegedly received this performance enhancing substance include icons like Barry Bonds of the San Francisco Giants and Jason Giambi of the New York Yankees. Baseball is turning into a chemically enhanced sport. Graph 1 displays the increasing number of home runs per game due to the enhanced power of athletes. 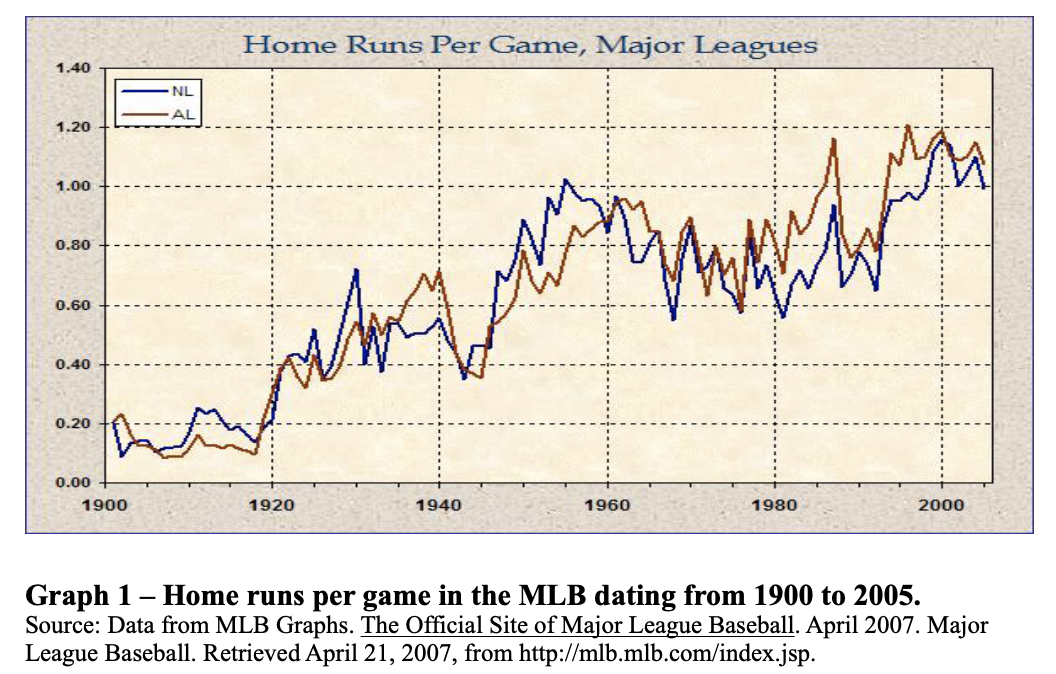 Do fans or even members of the MLB staff care that baseball is becoming chemically enhanced? BALCO has been breaking the law for years. Why has it taken so long for something to be done? It seems like supporters of Major League Baseball would rather sit back and enjoy the entertainment, ignoring the fact that some players are thriving due to the abuse of a substance rather than natural ability. It seems like steroids have become widely accepted rather than a criticized and frowned upon illegal substance.

It appears that illegal actions have been taking place in baseball for many years. Prohibition lasted from 1919 to 1933. During this time, Babe Ruth, the greatest home run hitter of the 1900’s, allegedly drank during baseball games. One of Ruth’s teammates Joe Dugan said, "Babe would go day and night, broads and booze (Zirin).” Other athletes have used drugs throughout the years. During the late ‘90s, a Pittsburgh Pirates pitcher Dock Ellis admitted to using LSD while pitching a no-hitter (Horowitz).

Congress has decided as a function of numerous complaints of its constituency   that Major League Baseball isn’t capable of keeping their business in order. They have also concluded that substance abuse is affecting the public in a negative manor. They are proposing legislation to control what has always been under the auspices of Major League Baseball. These proposals could force the organization to lose control of its operation (Stark, 2006).

Congress is becoming more involved in regulating Major League Baseball because of the amount of steroid related deaths in recent years. Players are looked up to and referred to as heroes by children and aspiring athletes. Athletes want to become the best they can. Kids see how their heroes become successful and follow their lead. Mother’s children are dying because a child wants to be like their favorite baseball player. People that are affected within the organization is one thing, but when kids are dying because they want to be like their hero who is using drugs, Congress must take action.

Major League Baseball has almost doubled from 16 teams in 1950 to 30 teams in 2007. MLB has expanded all over the United States and the world. There are teams in Canada, Latin America, and even Japan. Baseball was non-existent in those countries 50 years ago (Major League Baseball). The MLB has become accessible to everyone all over the world. The little kid in Toronto or Minnesota that loves baseball can now travel 20 minutes with their parents to watch a game instead of having to travel hundreds of miles once a year to watch their favorite team. Baseball has expanded into a world pastime rather than a national pastime. Graph 2 displays the rapid increase in attendance per game since 1901. 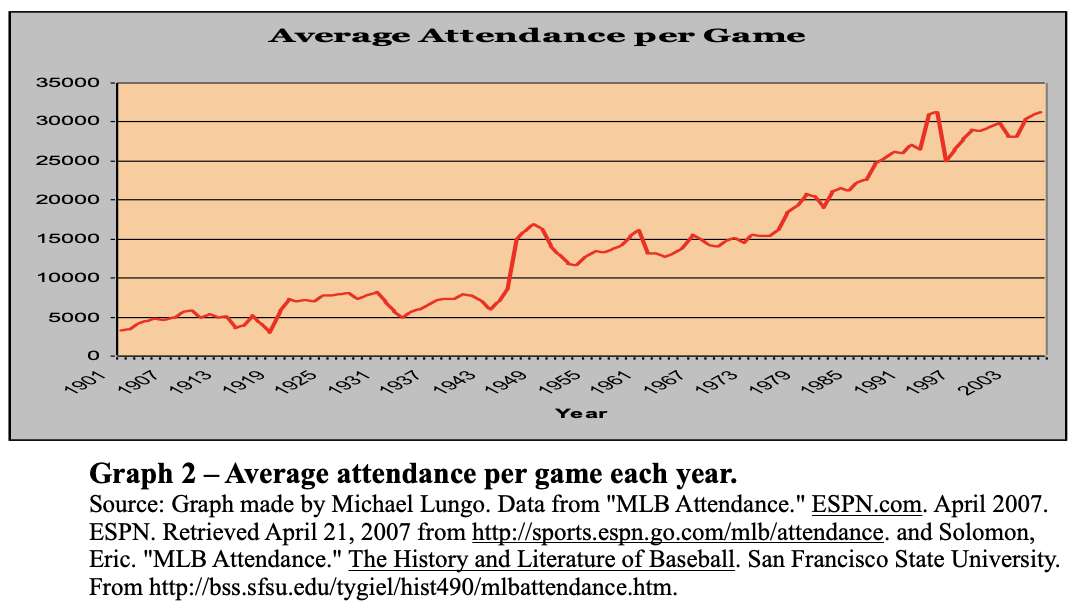 Home runs, faster players, and convenient ballpark locations have all contributed to the excitement of Major League Baseball. Whether the players increased ability is illegally enhanced or not, baseball has and always will be exciting. The increased excitement attracts fans which generates revenue. Television, sportswear, and concession sales generate income for MLB.

MLB is great for the economy. Baseball brings people together at the park. It gives people something to talk about daily. There’s fantasy baseball and video games where fans can act as a manager of a team. Radio stations make money announcing games. Local businesses make money selling merchandise or food close to the ballpark. Manufacturers and retailers thrive during the baseball season due to sportswear sales. Major League Baseball brings people together.

While attendance increases, business thrives, and baseball becomes more popular, the players receive more money. When MLB generates higher revenue every year, they can afford to pay the players more and more money. Graph 3 displays the rapid increase in player salaries since 1967. 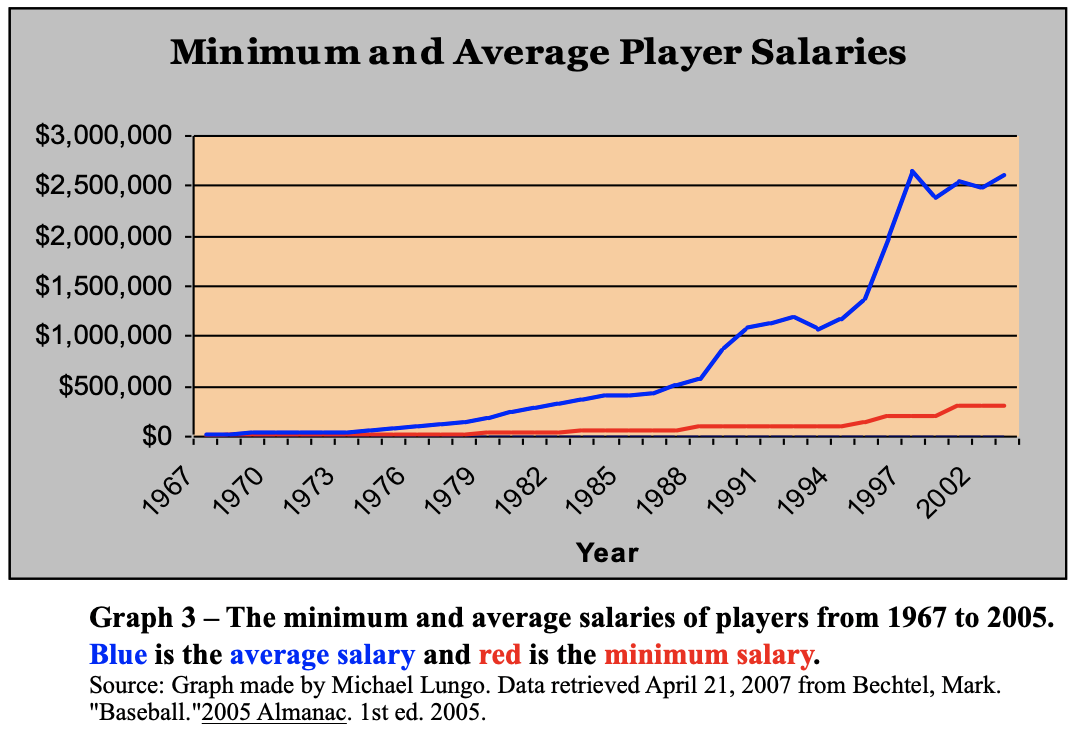 Even the government benefits from Major League Baseball. All of the increased profits that companies and organizations receive due to baseball are taxable. The Washington Nationals value rose 42% from 2005 to 2006. In March, Major League Baseball finally agreed to terms with the District of Columbia's local politicians that will have taxpayers pay most of the bill for a new $700 million stadium, which should open by the start of the 2009 season and add $40 million to $50 million to the team's revenue (Ozanian, 2006). Also, these taxes help the country pay off debts it owes from wars and excessive spending.

Everyone wins when it comes to baseball. Parents can take their kids to a game that is close by, businesses thrive, the government makes money, and fans get to see the greenest grass and bluest sky they’ll ever see; a baseball park. 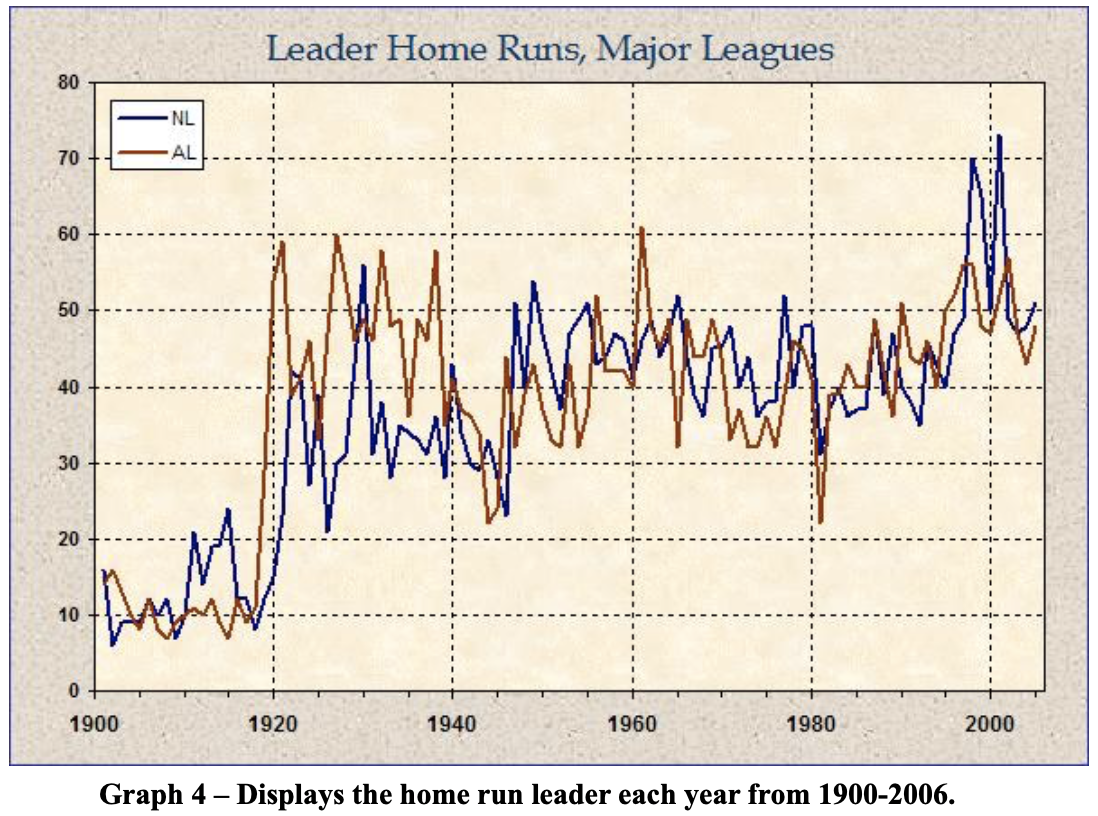 Whether players are enhancing their ability or not, baseball has and will always continue to prosper. There have been previous allegations of abuse with alcohol during prohibition and amphetamines during the ‘60s. Nothing happened and baseball continued to thrive and help the economy grow.

However, steroids do need to be removed from baseball. It presents a negative image of baseball and influences kids in the wrong way. The “zero-tolerance” rule needs to be put into affect. An immediate ban from baseball for the use of an illegal substance is the only way to ensure 100% that substance abuse stops. Fans will take satisfaction in knowing that the players are accomplishing feats with natural talent rather than enhanced talent.

Banning steroids can only make things better for Major League Baseball. Even though steroids do not affect the expansion and growth of MLB, there is a moral, legal, and ethical obligation to do the right thing. Allow Bud Selig to instate a “zero-tolerance” rule and ban steroids, but continue to allow the organization to flourish on its own like it has for so many years.